Let’s start with this: Kindness matters. If we weren’t sure about that, we could check the greeting card aisle at Target, or we could read those posters at any elementary school, the ones with oversized letters that say, “Be Kind.”

That’s great and all, but kindness actually matters even when you aren’t learning about sharing the safety scissors.

Kindness is not squishy, it is not boring, and it is not weak. Kindness has power. Hang on, I’ll explain. But first, a story about a comments section. 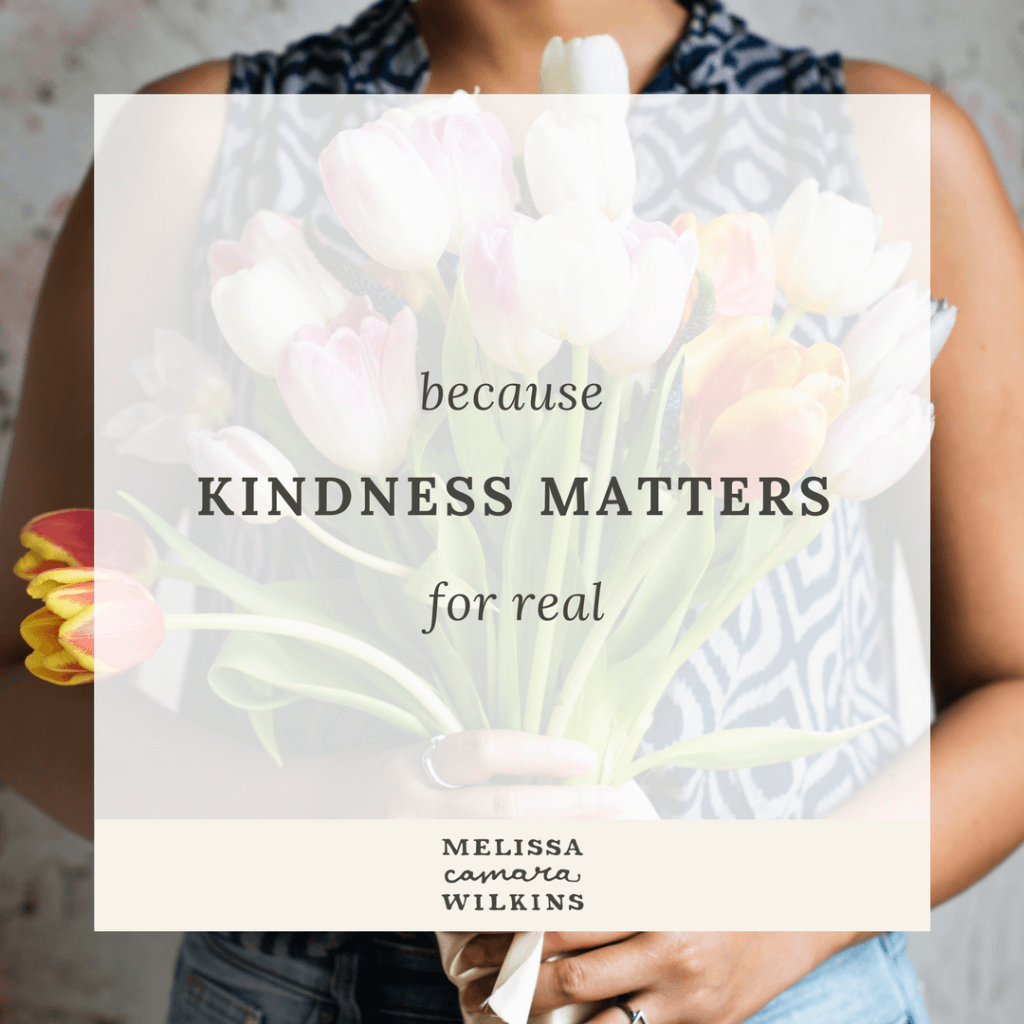 I read an article the other day that basically said, “Hey, y’all? THIS PERSON over here is being treated awfully by THAT GROUP over there.”

The group, in this case, had more power, and the person was standing with others who had less. I’m sure you can hardly imagine this dynamic, but there you have it. People with power treating others badly.

In the comments section of the article, several people piped up to defend the group-behaving-badly. Their argument went like this: “Well, if YOUR TEAM were attacking OUR TEAM, you probably would have done the same thing. You might even have been worse!”

Okay. Friends. For one thing, there are no teams. We are the team. It’s all of us together.

And for another thing, this is why the golden rule is not, “Do unto others what you suspect they might do to you if given the chance.” The golden rule is, in fact, kind of the opposite of that.

Kindness is not graded on a curve.

This is the wrong place to race to the bottom.

“Well, I was still better than THEM—or at least I wasn’t much worse” is not a defense for unkind words or actions or anonymous comments. Neither is “you probably would have done the same.” Our best choices have nothing to do with anyone else’s behavior. At all.

When we feel certain—so certain!—that the other person is wrong, kindness feels a little dangerous. It feels like giving up something we’re entitled to. (Something like self-righteous anger, or superiority, or smugness, or getting the last word. We might believe we’re entitled to them, but honestly we’re better off without them anyway.)

And anyway, there’s a kind of upside-down power in choosing kindness.

If we’re all trying to be just a little more venomous than the other side, we all end up drinking the same poison.

But if, instead, we all respond by being a little bit BETTER than we expect others to be, we all get to move toward a healthier world.

The internet makes it easy to imagine you’re just venting your feelings with no consequences, but that’s never true.

We can do better.

We are not second-graders, guys. We can disagree without the use of insulting memes. We can speak our disagreements with the voice of love. We know what love is like. Love is patient. Love is kind. Love doesn’t keep score. Love is not rule-keeping, love is people-tending.

It’s not love that attacks. It’s fear. Fear whines, fear is sarcastic and biting and rude, fear makes fun of people, fear cuts people off and casts people out.

The person you disagree with is just a person, broken and beloved, trying to figure out how to move through the world. (They may be moving through the world like a train wreck. I understand. But our argument is still with the way they’re going about things, not with THEM.)

Love looks for ways to transcend, to include, to move beyond the disagreement to find our common humanity.

Even if you don’t think the other person “deserves” a loving response, how we respond to other people affects US at least as much as it affects THEM.

You have to carry around those feelings that you’re putting out into the world. You have to live with what you say and do. Responding to unkindness with unkindness just keeps the same wheels spinning, and we never get anywhere at all.

That doesn’t mean you never get angry.

But let’s do that in ways we can be proud of. Be kind on the internet. Be kind across the table. Be kind because you are a beloved human being—and so is the person you disagree with.

You know—the you on the inside, the you behind the mask. Let’s find THAT you again. Sign up for email updates from Melissa, and get instant access to the Find Yourself mini-course.